POD SAVE AMERICA: Katie Hobbs Is Running Against The ‘Most Dangerous Candidate’ In The Country

POD SAVE AMERICA: Katie Hobbs Is Running Against The ‘Most Dangerous Candidate’ In The Country

PHOENIX – Secretary of State and frontrunner for Arizona Governor Katie Hobbs was featured on the popular “Pod Save America” podcast Thursday. Hobbs spoke with co-host Dan Pfeiffer about the numerous death threats she’s faced since the 2020 election and what it’s like to square off against Kari Lake, who Pfeiffer calls the “most dangerous candidate running for office in the country right now.”

During the interview, Pfeiffer played exclusive audio from a death threat Hobbs received the night of the primary election, where the caller labeled her a “communist f—ing traitor b—” and told her, “You better put your f—ing affairs in order because your days are extremely numbered. America’s coming for you and you will pay with your life.” 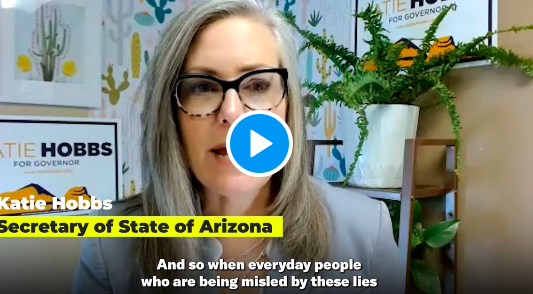 Below is a portion from the approximately 15-minute discussion between Hobbs and Pfeiffer:

[Pfeiffer]: Your opponent Kari Lake is, in my opinion, perhaps the most dangerous candidate running for office in the country right now. She has fueled the threats like the one we just heard. She is spreading lies. But she is also someone who is a former news anchor who has a long-term relationship with the voters in that state. What is your strategy for centering the campaign on her extremisms and informing the voters of Arizona why she would be such a dangerous choice to be governor?

[Hobbs]: Well, you’re exactly right that she is incredibly dangerous. And it’s not just because of her rhetoric and her focus on these election conspiracies, but it’s the actual things she said she would do as governor and her extreme positions on critical issues like abortion. She fully supports criminalizing abortion with no exceptions for rape or incest or even the life of the mother. Her proposals would kill women, and that is not being hyperbolic.

She has suggested that everyday Arizonans should be able to own rocket launchers, which are weapons of war that are designed to cause extreme destruction. And when given the chance to back down from these positions, she’s doubled down on them. And so she’s clearly dangerous.

And so our focus is making sure that Arizonans know that, but also that I’m the sanity in this equation. That this election is not about Republicans or Democrats, it’s about sanity versus chaos. And that we have real issues to tackle. And I have a record of working across the aisle to tackle problems and that’s the kind of leadership I’ll bring to the governor’s office to continue to move our state forward.