PHOENIX – As Kari Lake and Karrin Taylor Robson enlist Donald Trump and Mike Pence to join their race to the bottom in the Republican primary, Secretary of State and gubernatorial candidate Katie Hobbs remains laser-focused on delivering real solutions for everyday Arizonans. 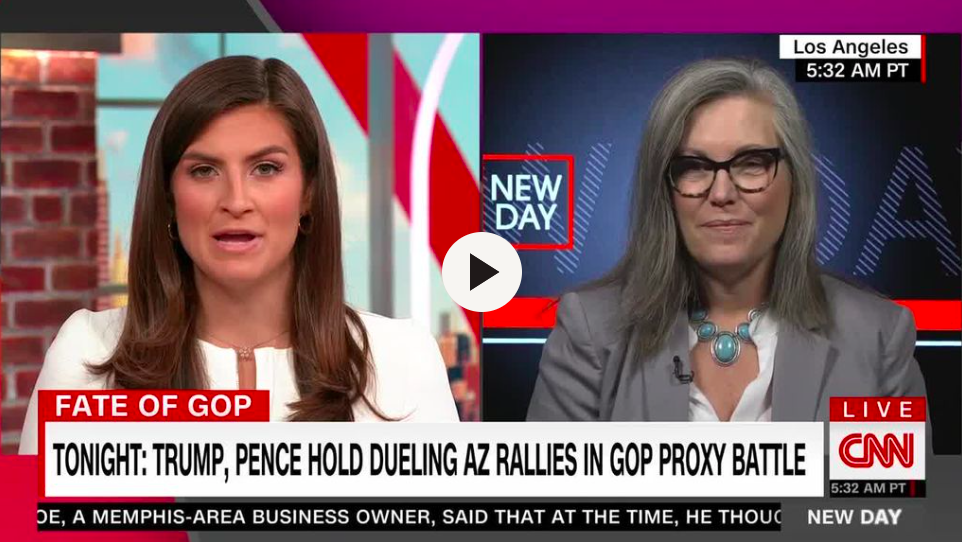 “The rival events that my two opponents are hosting with the former President and former Vice President are just another example in their bitter primary, where they are both just trying to be the most extreme versions of themselves in order to appeal to the most far right factions of their party,” Hobbs said on CNN New Day. “And in doing so, they’ve both taken positions that are so far out of the mainstream, they’ve made themselves unpalatable to everyday voters. They’ve spent this race arguing over drag queens and an election that happened two years ago, instead of focusing on the real issues that matter to Arizonans.

“I’ve been traveling the state, talking to Arizonans about how we can bring people together to solve our toughest challenges, like rising costs, fixing our schools, and protecting reproductive health care,” Hobbs continued. “That’s why I’m in this race. At the end of the day, this race is not going to be about Democrats or Republicans. It’s going to be about sanity versus chaos.”

Lake and trailing rival Robson have been ensnared in a messy primary battle in which the two have pushed each other closer and closer to the furthest end of the ideological spectrum. Both of them have refused to say whether they would certify the 2024 election and supported leading election deniers Mark Finchem and Wendy Rogers. In the wake of the Supreme Court’s overturning of Roe v. Wade, Lake and Robson have both advocated for criminalizing women who seek abortions and their doctors, and they oppose exceptions to abortion bans even in cases of rape and incest.

Hobbs cast her ballot on Thursday ahead of Lake’s and Robson’s rival events, using the opportunity to remind voters about the safe and secure ways to vote early as well as counter election disinformation from her opponents. Hobbs benefits from having a clear path to victory through the primary, allowing her to build up her warchest for the general election and release a series of plans tackling everything from the soaring cost of living to attacks on reproductive freedom and decades of federal inaction on immigration.

Trump Rally Reaffirms Kari Lake Has No Real Plans To Secure Arizona’s Border PHOENIX – Former president Donald Trump’s rally with Kari Lake reaffirmed that Lake’s plan to secure Arizona’s border is about as real as Trump’s promise seven years ago to make Mexico pay for his...