PHOENIX — A new OH Predictive Insights poll shows Secretary of State Katie Hobbs continuing to command a more than 30-point lead in the Democratic Primary race for governor. Hobbs leads the primary with 43% of the vote while Lopez and Lieberman are sitting in single digits. Last Friday, Lieberman suspended his campaign and acknowledged that he did not have a path through the primary. 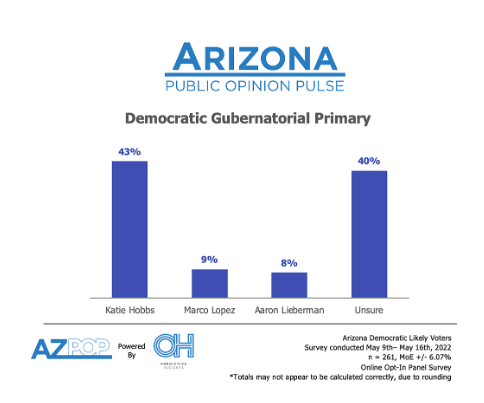 Prior to suspending his campaign, Lieberman spent nearly $600,000 on television. That was not nearly enough to change the dynamics of the race, and Lopez has even less money in the bank than Lieberman spent. With just about a month until ballots drop, it’s clear that Katie Hobbs has and will dominate this race from start to finish.

“Having an apparently safe lead among Democrats means Hobbs can save her resources for the general election, where she’ll face whoever emerges from what’s become a three-way Republican race among Kari Lake, Karrin Taylor Robson and Matt Salmon,” a Tuesday KTAR article noted.